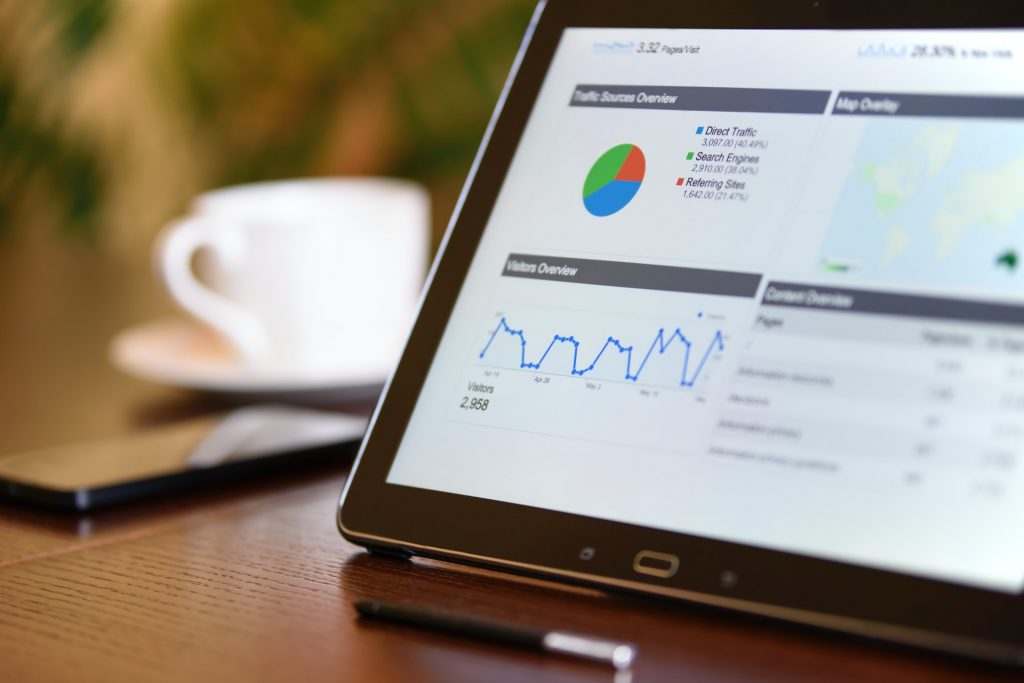 Let’s start with an example. The below image shows revenue data for a Facebook Ads campaign in Google Analytics:

What!!? That’s a HUGE difference! Shouldn’t clicks and sessions be the same thing? Same with revenue and purchases conversion value?

In this post, we’ll explain often hard to understand data discrepancies between Google Analytics and ad platforms like Google Ads and Facebook Ads, so you have a better understanding of how your digital marketing campaigns are REALLY performing.

When discussing various data discrepancies, it first helps to understand how Google Analytics collects and reports on your data. And in particular, Universal Analytics – not GA4. Google Analytics (Universal) is session-based, meaning that when someone comes to your website, Google Analytics tracks what you’re doing until one of the following happens:

The important thing to note is that conversions (or goals) in Google Analytics use the “Last Interaction” model.

What is the Last Interaction Model in Google Analytics?

It means 100% of the credit goes to that last touchpoint to the website. So if someone clicks your Facebook Ad and doesn’t convert, but then comes back later and converts organically by Googling your brand – “organic” will get the credit for the conversion – not Facebook Ads – since “organic” was the “last” touchpoint that led to a conversion. Facebook essentially loses credit for making the sale according to Google Analytics!

This is a HUGE reason why your PPC reporting and Google Analytics may differ. If your PPC platform (Google Ads or Facebook Ads) isn’t using last-click attribution, then it most likely has different values than what Google Analytics reports.

And even IF it uses last-click attribution, the numbers STILL might be different than Google Analytics.

Why? Let’s dive into that now.

Here you can see by default, it’s set to 30 days click-through conversion, 1 day view-through conversion. So what does that mean? This means, after someone clicks your ad, Google Ads will track that click for 30 days to see if you convert (i.e. – purchase in this example).

This means the person who clicked on your Google Ad could visit your site, then within 30 days come to the site again via another marketing channel and make a purchase and Google Ads would count it as a conversion.

If they click multiple ads, you can even assign which ad gets the credit. By default, Last-click attribution means that the last ad they click gets 100% of the credit. But you can also assign that as:

If you’ve ever wondered why sometimes you’ll see a fraction of a conversion in Google Ads, it’s because one of the last 3 attribution models were set.

Here’s an example of where Google Ads & Google Analytics are both set to “last-click” attribution, and why their numbers may not line up.

Let’s say a person clicks your Google Ad for your company’s new “cat skateboard” product (let’s call it “Cat Wheels”), not purchase at that time, but then Google your product name (Cat Wheels) and click on the “organic” (non-paid) search result for Cat Wheels and then purchase. In this example, Google Ads would still report a conversion, but Google Analytics would give the credit to “organic”.

So even though we have set the Google Ads conversion to “last click” attribution, just like Google Analytics (technically last non-direct touch) – the numbers may not line up because of the way Google ads and Google Analytics track the sale. Google Ads gives credit within the 30 day window if the person clicked on the ad and purchased during that time. Google Analytics is giving credit to organic since that was the last touchpoint to purchase.

What about the 1 day view-through conversion? What does that mean? This only applies if you’re running display ads, so we’ll skip this for now but will come back to it when we discuss Facebook Ads. Essentially it means Google Ads will take credit for the sale if a person “sees” your ad and then purchases within a 24 hour period. After that 24 hour period, that sale will not show up in your Google Ads report even if they did purchase 48 hours later.

Let’s take a look at this Google Ads account:

Traffic source is google / cpc, which is by default what Google assigns to all their Google Ads PPC search traffic.

Why is the data discrepancy happening here with conversion value and GA revenue?

As for discrepancies in conversion value in Google Ads and revenue in GA, the reason Google Ads is higher is because Google Ads is tracking you for a specified time period (default is 30 days) where Google Analytics is only attributing the sale to the last interaction (i.e. – organic), even if you originally clicked a Google Ad first.

Now that covers conversions. But what about the click discrepancies you see in Google Analytics, Google Ads and Facebook Ads?

Not always. You see, with Google and Facebook Ads, it’s a pretty straightforward method for counting clicks. As soon as someone clicks the ad, it gets sent back to their platform and it is counted. However, with Google Analytics, SEVERAL things need to happen before a session is counted, and if you want to know all the details, here’s Google’s support documentation on this topic.

The bottom line is after they click the ad, they need to stay on your website long enough for the Google Analytics tracking code to load and be accepted by the client’s browser.

So if your website is temporarily down, or the user clicks away from the site too fast, or perhaps they have some kind of script blocking tool, it won’t get counted in Google Analytics, but it WILL get counted as a click in Google or Facebook Ads.

So that covers clicks and session differences in Google Analytics, Google Ads and Facebook Ads –  now let’s come back to what we hinted at earlier, which is View Through Conversions.

This is a BIG one, especially on Facebook. Have you ever looked at your reports and seen spectacular results on Facebook, but then when you look in Google Analytics it tells a far different story?

And if you’re signed into Facebook on your desktop and mobile device, they can easily keep track if you click an ad on one device and purchase from another.

But Facebook also counts a conversion with 1 day view (Otherwise known as a view through conversion). What THIS means is if someone doesn’t even click on the ad, they just happen to see the ad as they’re scrolling through, Facebook would count this as a conversion if that person purchased within 24 hours.

This comes into play more often with remarketing campaigns. Someone may be planning on buying your product today, they check Facebook or Instagram and glance at your ad but don’t click it. Later on that day, they come to your site and purchase. In this case, Facebook is saying because they glanced at your ad, even though they didn’t even click it, this “view” influenced you to purchase and counts it as a conversion.

Within Facebook’s reporting platform, you can separate columns out easily to show how many of your conversions came from people actually clicking, and how many people only viewed the ad.

As you can see, the numbers can often be quite startling, where you’ll notice A LOT of your conversions that Facebook reports came from view through conversions, so they didn’t even click on the ads!

Which brings us back to Google Analytics. They’re DEFINITELY not going to give any credit to someone that just viewed an ad on Facebook. They have know way of seeing that. Only Facebook has that kind of information because of the Facebook pixel that you placed on your website.

Why Does Facebook Ads Report More Conversions Than Google Analytics?

Quite often you’ll see Facebook reporting a lot more conversions than Google Analytics, and again, the two primary reasons for that are…

2) Facebook by default counts view through conversions, which can make up for a surprising amount, while Google Analytics gives zero credit to an ad view because they can’t see that information.

One quick caveat: In order for Facebook traffic to even show up correctly in Google Analytics, you need to append code to the final URL called UTM codes which helps Google Analytics know where the traffic is coming from.

You don’t have to worry about this with Google Ads, because they create these UTM codes for you automatically.

One last factor that has to be mentioned when it comes to conversion discrepancies is tracking setup and user error. To setup conversion tracking, you have to do them separately in Google and Facebook.

This is a huge potential reason why conversions may be different. It is common to see that whomever setup conversion tracking may have done it differently across platforms, either because they simply forgot, or there were some other technical hurdles involved. For example, someone may have set a “lead” on Google as someone reaching the “thank you” page, but on Facebook they set up a lead as a “click” on the contact us button.

The bottom line is, if your conversion tracking isn’t setup identically across each platform, then that could be another reason for data discrepancies between Facebook Ads, Google Ads and Google Analytics.

Which Data to Use for Conversions and Clicks?

One of the common questions we get from clients is: Which conversion tracking data should I use? The native platforms like Google and Facebook, or Google Analytics?

That answer is really up to you, but for us here at Two Wheels Marketing, we rely on each PPC platforms’ reporting, with some caveats.

On Google Ads, we mostly set our attribution to “Position-based”, because we feel it’s the most fair way to give credit for a purchase. This means that the credit for the conversion is more equally distributed between campaigns or platforms that expose a person to your brand initially, and those that do so later to “close” the deal. This is opposed to the standard Google Analytics attribution, which gives credit to the “last” non-direct medium that closes the deal. So if someone clicked your Google Ad first and then converted later by Facebook, Google Ads would not get any credit in Google Analytics. And that just doesn’t seem fair to Google Ads!

As for view through conversions (like with Facebook), we do feel there is some value in someone seeing an ad and it reminding them to make a purchase later that day, even if they aren’t immediately clicking the ad.

After all, people are often busy, so it makes sense that they may not be ready to buy right at that moment they are served up an ad. We like to keep track of view through conversions, but separate them out in reports so clients get the full picture the results they’re getting.

But hopefully this article has shed a little more light onto the differences and data discrepancies between Google Ads, Facebook Ads and Google Analytics.

If you have any questions, and unsure in any way how your data is reported, be sure to let us know!

Get our Free Search Marketing eBook 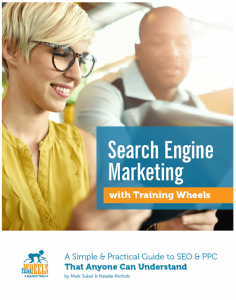